Kenya experiences a bimodal rainy season, with long rains occurring in the period March-June, and short rains in October-December. The short rains of 2019 started already early September and have not completely seized yet. This resulted very high total precipitation amounts, flooding and mudslides in East Africa.

The Standardised Precipitation Index (SPI) can be used to analyse rainfall patterns, using the climatology of a specific location. The SPI index for the last 3 months, using rainfall measurements by satellites, is shown in Figure 1 and clearly shows the wet areas in East Africa. This means that the rainfall amounts of last months are unusual and did not occur on a regular basis in last decades.

A cause can be found in the unusually high sea surface temperatures in the Indian Ocean close to East Africa. This pattern is referred to as the Indian Ocean Dipole (IOD). The IOD-index was exceptionally high the previous months and the strongest such event since 1997. A problem is that East Africa is projected to experience continuing high rainfall amounts coming months (Figure 2). This will likely lead to more problems, as the soil is already wetter than normal. Monitoring those rains can be hard as the observational network of rain gauges is limited. In order to advice farmers in areas with few observations too, remote sensed products can help monitoring such events. 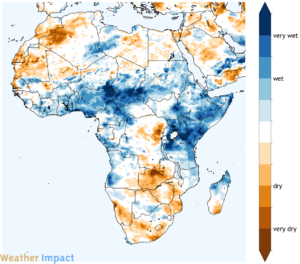 Figure 1 (left): the SPI for Africa for the last 3 months, based on the CHIRPS data. Figure 2 (right): the ECMWF seasonal precipitation forecast for Africa next three months. Both figures are calculated by Weather Impact at 17th of January 2020.