The monsoon season in Myanmar is about to start. For farmers, the monsoon season is the main source of water for their crops. Information about the seasonal precipitation forecast is therefore vital and helps them in their long term planning. After a successful pilot during the 2020 monsoon season, Weather Impact continues to provide a monthly seasonal update with the rainfall forecast for the Htwet Toe application.

The seasonal forecast for Myanmar has a lower predictability than in other years and is caused by the neutral phase of two important drivers of the monsoon season in Myanmar; the El Niño Southern Oscillation (ENSO) and the Indian Ocean Dipole (IOD). The onset of this year’s monsoon period is uncertain and no clear signal for a drier or wetter onset is unanimously predicted by the models (white colours in Figure 1). In the south eastern part of the country, the models provide a light signal for slightly increased rainfall than average in the month May (green colours in Figure 1), which vanishes in the month June. 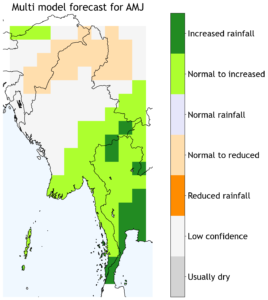 Figure 1. Rainfall forecast for Myanmar for the 3 month average of April, May, June.
Based on the model from April 2021

To tailor the seasonal forecast for the Myanmarese townships, the seasonal forecasting models from the Copernicus Climate Data Store are combined and bias corrected to the local precipitation amounts. Using the bias corrected models, we provide monthly rainfall predictions to the farmers. These monthly forecasts can be compared to the local climatology and to the previous two years of precipitation. In Figure 2, an example is given of a localized seasonal forecast for the Labutta township in Ayeyarwaddy. Here we see that the onset of the monsoon season in May is wetter than normal and also wetter than the previous two years. From June, the forecasted rainfall amounts are around the normal values. However, due to the lower predictability of seasonal rainfall patterns this year, there is a larger uncertainty around these values.

Farmers use these forecast to plan their long term farming activities and optimal planting date. Despite the difficulties of reaching the farmers in Myanmar in these times, our partner VillageLink is working hard to deliver our weather and seasonal forecasts to the local farmers. You can read more about our work in Myanmar here. 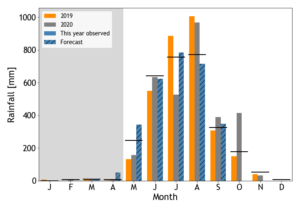 Figure 2. Seasonal rainfall forecast for Labutta township (Ayeyarwaddy), provided in April 2021. In this figure monthly precipitation sums of this year (blue) and last two years (grey and orange) are shown. The climatological average is represented by black horizontal lines and can be used to define whether the forecasted seasonal is drier or wetter than normal. The seasonal forecast is shown in the blue dashed bars.